The people of Antigua and Barbuda will tomorrow elect a new government after an intense election campaign.

While there are seven political parties and five independents vying for control of the 17-seat parliament, political observers say the contest is a straight fight between the incumbent Antigua and Barbuda Labour Party (ABLP) and the main opposition United Progressive Party (UPP).

Prime minister Gaston Browne, who is leading the ABLP into a second general election, is promising to follow his prime ministerial colleague in Grenada, Dr Keith Mitchell, who led his New National Party (NNP) to a complete rout of the National Democratic Congress (NDC), by winning all the seats at stake.

But the UPP, which governed this country for ten years before being ousted in 2014, is not perturbed by Browne’s prediction and is instead urging supporters to put an end to the corruption and unfulfilled promises of the ABLP administration.

“Antiguans and Barbudans your lives and your livelihood and this country’s future are in your hands. On the left, there is hopelessness. On the right, there is hope, happiness, opportunity, prosperity and empowerment,” said UPP leader Harold Lovell, a former finance minister, who is leading the party into a general election for the first time.

In the 2014 general election, the ABLP won 14 of the 17 seats with the remainder going to the UPP.

Browne called the election more than a year ahead of the constitutional deadline, telling supporters his administration wanted to safeguard billions of dollars in new investments to come to the country in the next few years.

However, Lovell is maintaining that this is not the case.

“Despite his penchant for tossing around numbers, the truth that all of us – outside of the Browne circle – know and live, is that life is harder than ever after nearly four years of this wicked government,” he said.

The leader of the Democratic National Alliance (DNA), Joanne Messiah, a former UPP legislator, who is leading her recently formed party into the general election, has also described the government’s performance as one of epic failure, dismissing Browne’s arguments as a “ruse” and “a political gamble” by “a desperate PM who is devoid of ideas regarding how to jumpstart a failing economy using creative ways without selling out our country and our people.

“The economy continues to underperform and this fact has a direct correlation on employment and investment [local and foreign]. Added to this is the fact that government’s principal revenue earner, the Citizenship by Investment Programme, has virtually dried up,” she added.

There has been no national debate among the leaders heading into the general election, but on Friday, in a prelude perhaps to what the final days of campaign could look like, both Browne and Lovell, appeared on a radio programme here in an 18-minute long no-holds-barred exchange.

The Observer newspaper reporting on the radio programme said they hurled “insults and levelled accusations of corruption at each other while they shouted over each other and the hosts”.

Browne told the radio listeners he was prepared to resign ahead of the elections if the opposition could substantiate claims of corruption against him.

Both parties have released their manifestos promising to improve education, health, agriculture, sports as well as lay the groundwork for further investments in the vital tourism industry.

The prime minister has described the UPP manifesto as “extensive plagiarism” filled with “worthless promises.

“What they delivered is not hope, but disappointment,” Browne said.

However, Lovell has reminded UPP supporters of the “false” promises made by Browne during the campaign of 2014, including that of delivering 500 homes in 500 days.

The campaign has been dogged by allegations of voters being offered cash in exchange for their support, an accusation that both the ABLP and the UPP hurled at each other.

“This illegal practice of paying electors to give up their voter identification card, is intended to ensure that these persons would be unable to vote in the upcoming election,” the UPP said in a statement, describing it as “blatant bribery” that is in contravention of the Representation of the People (Amendment) Act 2001.

“This is a corrupt practice under our elections law, but we are not in the least surprised,” said UPP legal advisor Leon Chaku Symister adding, “it is our intention to take further steps to have law enforcement monitor these violators with a view to bring them to justice”.

But the ABLP chairman Chet Greene has brushed aside the allegations, demanding that the opposition brings evidence to support its claim.

In a statement, the ABLP chairman described the claim as “fake”, while charging that over the last three general elections “the UPP engaged in the skullduggery that they are now trying to attribute to the ABLP in this election”, even as he too failed to provide evidence in support of his claim.

The lone candidate of the Barbuda People’s Movement (BPM), Trevor Walker, failed in his bid to get the High Court to prevent the Antigua and Barbuda Electoral Commission (ABEC) from having the people of Barbuda cast their ballots on the island of Antigua.

Barbuda was severely affected during Hurricane Irma’s passage through the Lesser Antilles last September, forcing the government to order a total evacuation of the island. However, since then the evacuation order has been relaxed and many of the 1,600 Barbudans have returned to their homes.

In the last general election, 47,721 persons were eligible to cast ballots, but this year’s figure has risen to more than 50,000. There are 168 polling stations scattered across the island. 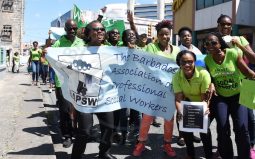 VENEZUELA – US offers $2.5m in aid to Venezuelans  in Colombia

CARACAS – The US has announced it will provide $2.5m (1.8m) in aid to Venezuelans who have fled the economic crisis in their homeland for neighbouring Colombia. Venezuela is experiencing severe shortages of medicines and basic goods. The US said the money would provide fleeing Venezuelans and the Colombian communities hosting them with emergency food […] NASSAU – A 42-year-old schizophrenic man has been held in prison without medication, charge or court date for more than three years. Alfairs Agregory Higgs was arrested in Freeport after an incident at the immigration department in February 2015. Now Higgs’ family are begging the government to intervene as they fear as he waits in […]

The main opposition United Progressive Party (UPP), has expressed concern about the state of the register for elections ahead of Wednesday’s general election. In a statement late Saturday, the party said that the Register for elections that was published on March 12, could have been released in “error and may not be the list upon […]